A couple of weeks ago, I raced Ironman Lake Placid.  I came across the line in 9:33:25, which was good enough to make me the 5th place professional.  Going into the race, I didn’t care about my time, all I cared about was my place.  Looking at the field, I knew it would be a good day for me to get in the top-5, so my goal was to finish 5th.  Success! Haha!

I love the swim in Mirror Lake.  Perfect temperature, perfectly flat water, and a convenient underwater cable line, so that we barely even have to sight.  Just follow the cable!  Easy as cake!

After the cannon fired, we had a mess for about 300 meters, but things settled down pretty quickly.   I was in a group of 5-6 guys, but they dropped me at the turn at 900 meters.  I then swam the rest of the way with Ryan Grant, and we did a pretty good job of working together.  It was a swim PR for me, so I was happy when I got out of the water. 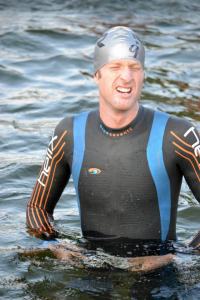 I took out the bike a bit harder than planned, but things felt good, so I just went with it. At the first turnaround (roughly 35 miles into the race), I saw that I was in 9th place, but only about 3-4 minutes down from 5th.  Perfect!  Exactly where I was hoping to be.  At the second turnaround (about 10 miles later), I had maintained my gaps to the other riders, so things were on track.  Knowing where I was in the field, and knowing that I had gone a bit too hard on the first 56 miles, I backed off considerably on the second half of the bike, in an attempt to save my legs for the run.  I knew I would give up a couple more minutes to the guys I was chasing, but it seemed that on the hot, windy day we were dealing with, being slightly conservative was the right approach. 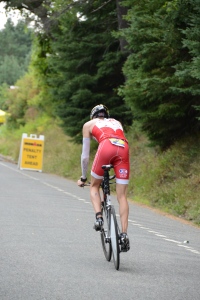 Getting off the bike, my legs felt pretty trashed, still hurting from over-biking on the first  56 miles of the bike.  Con sarnit!!  I usually go out pretty hard during Ironman runs, but given how my legs felt, I was fairly confident that going out hard would end up in disaster.  So again, just like on the 2nd loop of the bike, I held myself back.  I wasn’t going easy, but I certainly wasn’t going very hard, either.  The plan was to just coast along until my legs “came back to me.”  Along the way, I managed to work my way into 7th place, which was nice.  Then, at about the 8 mile mark, my legs returned, and at that point, I decided I had to make a move at the halfway point.  So, I continued my relaxed cruising until mile 13, but then when I hit mile 13, it was time to attack.  It hurt like a son of a gun, but it paid off, as I took over 5th place at the 17 mile mark.  The last 9 miles were just survival, and I had to do everything I could to hold off Brad Seng, Tim Tapply, and Logan Franks.  They were coming at me hard, and I had to go pretty deep in the well to hold them off.  Below is a graph of my HR profile during the run.  Based on the graph, it looks like I nailed the pacing, but that lift at the end?  Oh my!  That hurt like nothing I’ve experienced in recent memory…  My hamstrings then thanked me by simultaneously cramping right as I crossed the finish line.  Good timing by them I guess, right? Ha!

My finishing time wasn’t particularly inspiring, but this was the best “race” I’ve ever been involved in during my triathlon career.  I say that because many Iron-distance events are essentially glorified individual time trials.  But this was no time trial – it was Logan, Brad, Tim, and I racing tactically, and fighting it out for 5th place.  I have a lot of respect for those guys, so I was very happy about coming out on top.

Of course, I’d like to thank some people and companies for believing in me, it means more than you might imagine.  My coaches – Tim Snow and Jesse Kropelnicki, of QT2 Systems, have put up with some really insane questions from me.  Mike Orton and Ryan Vanderloop of blueseventy have been awesome about making sure I have the best swim gear possible.  Jeff Clarkson of Schwalbe Tires gets me on the fastest tires in cycling.  Tom Keen at Cliff Keen has gone above and beyond the call of duty to get me in a super comfortable (and stylish!) custom-designed racing kit.  Eric Walle and George Thoma at Clif Bar keep me fueled with the healthiest & tastiest gels, bloks, bars, and drinks in sports nutrition.  Anders Porter for getting me some Core Power, which tastes like melted ice cream… but is somehow an incredibly healthy protein supplement (amazing!).  Chris Lupo of Rudy Project has protected my noggin with some awesome sunglasses and bike helmets.  And of course… the “Marty McFly look-a-like” himself, Sean Walter of QF Media, for having my back and always looking for new ways of helping me to advance my career as an athlete.

Special shout out section for all of QT2, especially Mary Eggers (and her Egg-A-Phone!), Tim Snow, Cait Snow, Charlie Abrahams, Pat Wheeler, and Jesse Kropelnicki.  Their support during the race was the best I’ve ever experienced, and it played a huge role in getting me to the finish line.  I felt like we had “home field advantage” at Lake Placid, and they were the biggest contributors to that advantage.

Now, it’s time to put Lake Placid in the rearview mirror, and get ready for Rev3 Cedar Point and the Leadman 250!!