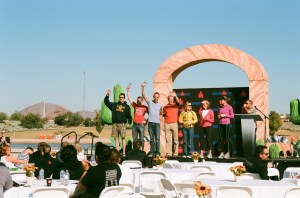 Swim – 1:10:01 (2.4 miles).
Not much to say. It was pretty chaotic, as is expected when it’s a mass start of 2500 athletes. The first half resembled a Muay Thai boxing match, as I was getting punched/kicked a lot. But, these things happen in Ironman. Things opened up after the turnaround, and I was able to lock into a good rhythm. A little slower time than I was hoping for, but nothing disastrous.

Bike – 5:02:47 (112 miles, 22.2 mph).
The course was 3 laps on an out-and-back. Fantastic bike course. Beautifully smooth pavement, and not very many turns. There was a steady breeze on the first 2 laps, but the wind died down for the 3rd lap.
I went out at the pre-planned wattage (230 watts), and just stuck it for the entire ride. It felt very easy at the beginning, and I was getting passed by several people. However, I stuck to the plan, stayed patient, and refused to get caught up with everyone else’s early zeal to go hard. This paid off big time. By the second lap, every single person who had passed me earlier was in my rearview mirror. They all went out too hard, and paid for it. Meanwhile, I just kept spinning at my conservative pace, and felt great for the entire ride.

Run – 3:10:20 (26.2 miles, 7:15/mile)
The course was 3 laps, and mostly on concrete sidewalks. I felt good coming off the bike, and went out at what felt like a natural pace. I wasn’t pushing, and I was cruising at 6:50/mile, so I just went with it. The race didn’t even start hurting until about 10 miles into the run, and even then, it wasn’t too bad. I just slammed some extra endurolytes and some extra caffeine, and all was well. My pace slowed down a bit from miles 10-20 as I was getting a bit tired, and I had to stop twice for bathroom breaks (I haven’t mastered going while running… yet). When I hit the 20-mile mark, I told myself to harden up, picked up the pace, and started emptying the tank. I closed strong, as the last 6 miles were at sub-7:00 pace.

-This is my fastest Ironman yet. Everytime I get out and do an Ironman, I knock huge chunks of time off my PR. Things are definitely tracking in the right direction. In my second season of racing, I’ve dropped my Ironman PR from 10:59:33 to 9:32:23.

-Qualifying for Hawaii is a huge step in the career of any triathlete, so I’m proud of that.

-Despite the fact that I had a “breakthrough performance”, I’m really not that excited about it. I expected to do it, and anything less would have been a disappointment. All I did was go out and perform to expectations. It served as a good milestone to mark my progress, and it showed that I’m progressing nicely towards my long-term goals.