This was a very interesting event, both in terms of the lead up to the race, and the race itself…

As many of you know, Boulder has been ravaged by floods.  My apartment is up in Sunshine Canyon, so I assumed that I was safe from the flooding, since I live on high ground.  How wrong I was…

I woke up on the morning of Thursday, Sep 12, and the carpet in my bedroom was completely soaked.  I then went into the bathroom, and there was about 1″ of standing water on the floor.  AJ Baucco (who was in town to train, and acclimate to high elevation before we both raced Tahoe) then came out of the guest room, and we said to each other, “We need to get the hell out of here.”  So, we hurriedly packed my car, and bolted (all the while, the water was slowly rising).  The only road out of Sunshine Canyon was covered with debris, and it was like driving down an obstacle course.  Several of my neighbors had their driveways/yards destroyed, and there was a huge chunk of road missing in lower Sunshine Canyon.  It was unreal.  We then inched our way out of Boulder, driving on whatever roads we could find that weren’t underwater, and were on our way out to California  (I later found out that the only road out of Sunshine Canyon had been shut down, about 1 hour after we left… so we *just* barely made it in time… phew!)

Now, onto the race itself….

In the days leading up to the race, the air and water temperatures were dropping rapidly, and we were facing a race day with water temps of 62 deg F, and air temps of 28 deg F, at 7:00 AM.  I was actually surprised when the swim wasn’t cancelled.  Not because of the water temperature (the water actually felt great), but because of the risk associated with 28 degree air hitting a person who was soaking wet.  But, we swam as planned (and yes, I’m glad we did) 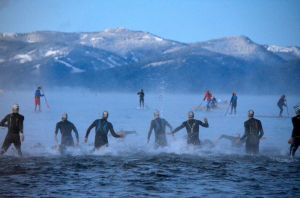 The swim started off poorly for me, and then went downhill from there…

The swim started before sunrise, so it was dark out.  Also, since the air was so cold, there was a layer of fog on the water, making it very difficult to see the course buoys.  But what really hurt me was my goggles:  they were completely fogged up, and I could not get them to clear up.  I could only make out vague shapes of objects around me when my head was above water, and I was completely blind when my head was underwater.  I had to stop several times in the first few hundred meters, just to wash out my goggles, and ask the paddleboard volunteers where the heck the course was.  It was a disaster.  Through sheer luck, I ended up swimming with a group of 4-5 for most of the first lap.  But if I had been able to see (and didn’t have to keep stopping to clean out my goggles), I’m confident I would have been further ahead, swimming in a faster pack, because my stroke felt great, and I was actually swimming really well.  But… so it goes.

Racing isn’t just about “physical output”, it’s also about setting yourself up for success, so that you can take advantage of your “physical output”.  Sure it was bad luck that I had such bad goggle fogging, but I also could have done more to prevent it.  Other athletes didn’t have the same fogging issues, because they had taken the proper steps to ensure they wouldn’t have fogging issues.  I was lazy about addressing the potential fogging issue before the race, and it came back to bite me in the butt.  It’s my own fault for not being better prepared.  From now on, I’m only going to race in brand new goggles, just to maximize my chances of having clear vision.  Lesson learned.

T1:  As soon as my feet hit the sand, my feet went numb from the cold, and my fingers went numb quickly thereafter… wheee!!!!  I ended up taking an embarrassingly long 8:24 in T1, just because it was so difficult to put cold weather gear onto wet skin, with non-functioning fingers.  (here’s what I wore on the bike:  my tri kit, embrocation cream on my legs and feet, a Skins long sleeve base layer, a cycling vest, cycling gloves, 3/4 length bib shorts, calf compression sleeves, socks, and toe covers)

Bike: The first 10-15 miles were very cold, but then my day started improving.  At mile 15, Henrik Oftedal caught me, and we rode together for about 20 miles.  He dropped me on the first climb up Northstar, but I was ok with that.  We had a long day in front of us, and I suspected I’d catch up to him again later (which I did, overtaking him on the second half of the run).

Matty Sheeks then caught me at mile 45, and we rode together for about 20 miles.  But he dropped me when we hit a “no passing zone” on a bike path.  Just by a fluke of timing, we got to the bike path at exactly the same time as an age grouper who was on her first lap.  He ended up right in front of her, and I ended up right behind her.  The “no passing zone” was only about 3/4 of a mile long, but Matt took advantage of the situation, and bolted off the front.  Meanwhile, I was stuck behind this lady, going 10 mph.  It was extremely frustrating, to say the least.  By the time we were back on the roads, and I was allowed to pass again, Matt was long gone.  Out of sight, out of mind… so it goes…

The rest of the bike was challenging, but uneventful.  I really enjoyed this bike course, as it had a bit of everything:  extended flats for fast riding, 4 serious climbs, and some fast descents.  Combined with the spectacular scenery, I think it’s my favorite Ironman bike course so far.

T2: Completely unremarkable.  I just took off all my cold-weather cycling gear, and stripped down to my tri kit.  With air temps in the low 60’s, it was ideal running weather. 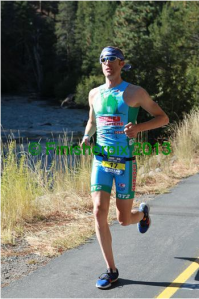 I took off with my usual “Ironman shuffle”, and ticked off the miles at 6:50-7:05 pace.  I ran with Alejandro Santamaria for the first 8-9 miles, which was nice, as we were able to work together.  But then he started to fade, so I went off on my own.  I also started passing several other athletes.  I wasn’t doing anything super, other than just “not falling apart”.  The elevation, combined with the leg-thrashing from the bike course, made the run a bit of a sufferfest.  But again, just like the bike, the scenery made up for some of the strain.  Also, I really liked the way the run course was set up.  There was a giant (18 mile) out-and-back, and then we did the out-and-back again, but only the first half of it.  So it ended up being an 18 mile loop, and then an 8.2 mile loop.  Mentally, that just made it easier for some reason.

At the end of it, I was a bit disappointed with my run time.  I ran a 3:04:39.  My Ironman marathon time has been stuck between 3:01-3:05 for 3 years now, which  I find to be very frustrating.  I may wear a watch on my next race, just to help me with pacing, and to ensure that I’m able to dip under 3 hours.  I honestly think I should be running about 2:54 for an Ironman marathon, but… I haven’t done it yet, so what I “think” doesn’t really matter, until I actually do it.  And while I don’t *really* care about times/splits (all I truly care about is placing), being stuck at the same marathon race pace for 3 years is starting to get on my nerves a little bit…

At the end of it all, after my “adventurous” swim & T1, I had worked my way up to 15th place, out of 30 male pros.  Certainly not the result I was hoping for, but given how strong the field was, and how poorly my day started, I’m proud of the effort.  It wasn’t my best day, but I continued to fight, and gained some valuable experience.  I’m also glad I did it, because it was such an amazing event.  The course was one of the best I’ve ever seen.  Lake Tahoe is the cleanest and most spectacular body of open water I’ve ever raced in. The bike course has perfect pavement, a fair & challenging course elevation profile, and epic views.  And the run course is beautiful, as we ran a marathon on a bike path along the Truckee river.  I hope it fits into my 2014 race schedule, because I’d love to race here again.

One thought on “Ironman Lake Tahoe”