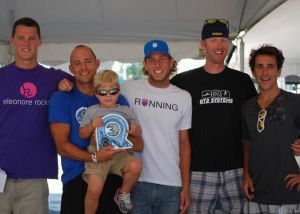 This past weekend I raced at Rev3 Cedar Point, which is a full-Iron distance race in Sandusky, Ohio.

After some misadventures with going off-course at TriStar Minnesota two weeks earlier, I was anxious to execute a strong race at Cedar Point. And part of executing a strong race is staying on course, so I made sure I knew the Rev3 course like the back of my hand! To accomplish this, I rode the course w/ AJ Baucco, Pedro Gomes, and James LaMastra one week before the race. I also drove the course w/ Brooks Cowan and Pedro Gomes the day before the race, just to be sure about every turn.

There were 16 male pro starters. We lined up in straight line across the beach, and I put myself in the middle. When the starter’s horn sounded, two packs formed. One to the right, and one to the left. I had a momentary brain fart, and just went up the middle, totally by myself. The two packs were gone, and I was left in no-man’s land. Unfortunately, I’m not a fast enough swimmer to make up for mental mistakes, so I ended up doing the entire swim by myself, with no feet to use for drafting. I knew I was waaayyy behind everyone else, and honestly, it sucked. I had a lot of time out there to think about dropping out of the race. But then, oddly enough, I started thinking about Denard Robinson and the Michigan football team. The previous night, they had a game against Notre Dame. The team came out flat, and at halftime, it looked like Notre Dame was going to run away with the game. But Michigan refused to quit, and they staged a semi-miraculous 4th quarter comeback to win the game. So I just told myself, “if Denard and Michigan could overcome a horrible first half, then maybe I could overcome a horrible swim…”

I came out of T1 with my hair on fire, determined to work my way back into the race. I threw my race plan out the window, and just started drilling the bike. I started catching people around mile 15, and was solidly back in the race by mile 30. I shut things down around mile 95, and just kind of cruised the last 17 miles, saving my legs for the run.

Oddly enough, at about mile 45, there was a mislabeled turn, and several athletes followed the misplaced arrow on the ground, and went a bit off course. However, I knew the course, and realized the arrow was a mistake, so I knew enough to not follow the misleading arrow (score!! my obsessive pre-race preparation paid off!!!)

Also – huge thanks to Ivan O’Gorman of Retul. In June, I rode IM Coeur d’Alene at 241 watts. In September, after getting a new Retul bike fit, I rode Cedar Point 18 watts higher. Coincidence? I think not. Also, it was my first race in a Rudy Project Wingspan TT helmet, and I cut 10 minutes off my Ironman bike PR. I’m not silly enough to say the helmet made all of the difference, but I am certain that it helped.

The run started off well, and I came through the half-marathon in 1:28 (not including a 2-minute bathroom stop), so things were right on track. But then my aggressiveness on the bike started catching up to me. The second half of the run was pretty ugly – I had to walk at every aid station, and I suffered my way through a 1:33 second half of the marathon. Fortunately, a lot of other people were falling apart worse than me, and I actually held things together fairly well relative to the rest of the field (thanks largely to a Clif Bar Chocolate Cherry Turbo Shot at mile 17… that’s 100mg of caffeinated giddy-up!!!) . At the end of the day, I crossed the line in 9:04:xx, which was good for 7th place, and a nice paycheck. Great success!!!

First of all, I’d like to give a huge congrats to Brooks Cowan, who came in 6th place in 9:00:xx. Before Cedar Point, he had never raced anything further than Olympic distance, but he just jumped into Cedar Point and executed a fantastic race. He was suffering out there, BIG time, but he toughed it out (like a BEAST!). Brooks definitely gets the H.A.M. award for September.

Second – that swim was embarrassing. I’ve made serious gains in the pool, and what I did at Cedar Point was not at all indicative of what I’m capable of. I made a bad mistake at the beginning of the swim, and it ended up costing me time. That will never happen again.

Third – I’d like to thank Krista Baker-Scheyer, and the entire Rev3 Race Crew. Everything about the site/venue was very well thought out, and they put on a fantastic event. If you want to do an overpriced “event” that is not customer-friendly and has insanely inconvenient parking options, go do a WTC (a.k.a. “Ironman” brand) race. If you want to do a well-organized, reasonably priced race, with a super-convenient transition/parking area, then race Rev3. Oh, and also, Rev3 rented the Cedar Point amusement park for athletes only on Friday afternoon for an hour. No lines!!! It was stupidly awesome. We rode the Top Thrill Dragster 3 times. Craziest roller coaster ride ever.

And last, but not least, I’d love to thank all the individuals who had faith in me, and helped me get across the finish line:

I’m not entirely sure what my next race will be, but I’m leaning towards Ironman Arizona (currently trying to convince Tim to sign off on me racing there!!!). In the meantime, I’m looking forward to doing some training with the Krepster (a.k.a. Pedro Gomes) as he comes out to Boulder this weekend for a 2-week training block.

Until next time… keep training hard, and resting harder!