Time – 9:19:09, 1st in M 30-34 Age Group, 1st Overall Amateur, 9th Overall (incl. pros).  I earned a Kona World Championships slot in the amateur field, but I did not take it.  Instead, I am going to immediately start racing as a professional.

Important preface to this post – In early April, I developed a femur injury.  I wasn’t sure what it was, but every time I ran, it felt like I was being stabbed in the groin with a screwdriver.  So, I had an MRI, and it turned out to be a stress reaction in my right femur.  I ended up taking 5 weeks off from running, started running again in late May, and only had 5 weeks of run prep prior to Coeur d’Alene.

On to the race…

Swim – 1:03:18.  First off – holy cow that was some cold water!  I’ve heard reports that it was anywhere between 52-56 degrees.  Now on to the swim itself… The first 200 meters were as chaotic as any swim I’ve even been involved in (http://www.youtube.com/watch?v=GGcjvTK-b8c).  After getting out of the early mob scene, things calmed down pretty quickly and I was able to get clean water for the vast majority of the swim.  I’ve put a lot of extra focus on my swim training this year, and it paid off on race day.  That was, without a doubt, the strongest I’ve ever swam in an Ironman.

T1 – 6:16.  I had an extraordinarily slow T1, because I was so cold that my fingers weren’t working, and as a result, I wasted a lot of time fumbling around with all my biking gear.

Bike – 5:05:45.  22.0 mph, 241 watts.  After putting on gloves in T1, I actually warmed up quite quickly while out on the bike, and felt totally normal by the 10 mile mark.  The first loop of the bike was quite unremarkable, as I went out at my planned power (250 watts), and didn’t pay much attention to anyone else in the field.  Howeva… things changed when we hit the halfway mark and started the 2nd loop.  I took the blinders off, and knew I needed to start making some things happen.

Coming into this race, I knew my main competition for the overall amateur title would be my buddies Steve Johnson and Pat Wheeler.  I couldn’t find Steve, but I knew exactly where Pat was.  He got out of the water 6 minutes before me, but I was slowly closing the gap on him throughout the bike.  Because Pat is such a strong runner, I knew I had to get to T2 before him, otherwise he’d just run away from me once we put on our running shoes (he recently ran a 1:18:xx half marathon in the Mooseman 70.3!!).  I finally caught up to Pat at mile 70, right before we entered the hills.  I knew the hills would be a great opportunity to open a gap on Pat, so I just started jamming on the pedals with an attack that lasted about 10 miles.  After that, I looked back and didn’t see him, so I backed off on the power and started letting my legs recharge for the run.  The power file for the ride is below.

Run – 3:02:38. 6:58 per mile.  Entering this race, my running was the “great unknown”, due to the above mentioned femur injury.  Out of T2, I was the 9th amateur (Huge thanks to Courtney Wheeler and Greg Probst for letting me know where I was in the field, and giving me splits to the leaders!  Their help was absolutely critical throughout the entire run.)    Typically, I attack hard on the first 5 miles of an Ironman run, but since I didn’t know how my legs would hold up late in the run, I stayed conservative at the beginning at went out at 6:40 pace.  The first loop was quite easy, as my HR was in the low 150’s the entire time, and I came through the half-marathon mark in 1:29:xx.  By the time we hit 14 miles in, I had moved up to become the 2nd overall amateur.  I took over 1st place somewhere on the 2nd lap, but I’m not exactly sure where.  At about mile 17, my lack of run volume started catching up to me, and I was deep in the hurt locker.  But I knew I only had 9 miles separating me from my goal, and I was prepared to keep grinding through anything.  Luckily, there was no lack of motivation, because I was completely pre-occupied with staying ahead of Steve and Pat, who were right on my heels.  I knew the amateur race was gonna come down to the 3 of us duking it out.  They are both monster badasses, and I knew that if I let up for even a minute, or showed even the slightest sign of weakness, they would chew me up and pass me like I was standing still.  They’ve whipped my ass before at races, and I knew they were perfectly capable of doing it again.  Fortunately, I was able to keep things together, and when I took a left to run down the finishing chute, with 0.3 miles left, I knew I had finally done it.  I won’t tell you how happy I was, instead, I’ll just link to this video that pretty much says it all:  IM CdA finish line video  Also, the Garmin file for my run is shown below. 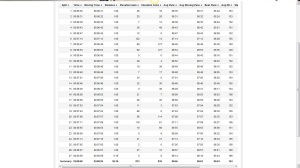 Overall impressions:  This was an absolutely huge race for me, and definitely the best day of my triathlon career (I’ll go into that in my next blog entry).  First and foremost, I’d like to thank my coach, Tim Snow, of QT2 Systems.  He was amazing, helping me through the femur injury.  I was nervous about my lack of run volume leading into the race, but he told me something I’ll never forget – “When you’ve put your body through the wringer a few times, you’d be amazed what it’s capable of.”  Also, thanks to Athlete’s Honey Milk, Cliff Keen Triathlon, and Schwalbe Tires.  For therapy on my hip/femur – Josh Shadle and Todd Plymale-Mallory at Tri-Massage were vital in helping me get through the femur injury, and their skills allowed me to reach my potential on race day.  And last, but certainly not least, I’d like to take this opportunity to let Cait Snow know that the title belt survived the flight home.  It’s safe and sound with me, back at it’s rightful home in Boulder (Cait and I had a bet… whoever went faster would earn the replica WWF title belt… talk about HUGE stakes!! The title will be up for grabs again next time we race…)

Until next time… keep training hard, and resting harder!