>On June 27, I raced Ironman Coeur d’Alene. I’ve done 4 of the North American Ironman races, and this one, without a doubt, has the best fan and volunteer support. The entire town of Coeur d’Alene embraces the event and the athletes, and it is an unforgettable experience. Running down Sherman Ave into the finish line feels like running through a canyon of cheering and support. It’s amazing. Now, onto the numbers!

Swim – 1:08:04. This swim was quite an experience. 59 degree water, giant waves in the middle of the lake (it felt like swimming in the ocean!), and some seriously combative athletes. I got my goggles punched/kicked off at least 6 or 7 times. I didn’t hit my goal time, but honestly, I was just happy to get out of the water alive. It was the first time I thought actual death was within the realm of possibilities for me at a race.

Bike – 5:02:44 (22.2 mph). A very questionable 4 minute drafting penalty knocked me back to 5:06:44. More on that later… Now, onto the bike report.
Once I was out of the water, I hopped in the saddle and got to work, sticking my goal wattage of 249 watts on the flats, and trying to manage the hills as best as possible without letting my power get too high or too low.
Things were going really well until the 60 mile mark. I had just passed a guy, and then he re-passed me almost immediately. So we go to the bottom of a climb, and he went flying past me up the hill. About 100 meters up the hill, he realized that he was tired, and he slowed down considerably. This put me in his “draft zone” (i.e. within 7 meters of his rear wheel). I didn’t think anything of it, because we were going slowly up a hill, so it’s not like I was getting any aero benefit, and things like this happen all the time on hills. Also, just to be safe, in addition to being 5-6 meters behind this guy, I also offset myself 3 meters to his right. But then, to my complete shock and dismay, an official pulls up to me and flashes me a red card. He said I was drafting, and it was my fault that I was less than 7 meters behind the other guy. 4 minute penalty. ARE YOU FREAKING KIDDING ME?!?!?!? I would literally have had to stop pedaling to get more than 7 meters behind this dude, and stopping pedaling is generally a bad idea when going uphill.

The next 20 miles were pretty rough, mentally. I was really fuming about the penalty, and it knocked me off my game a little bit. I eventually regrouped, but the lost focus definitely cost me some time. I came in averaging 238 watts, which wasn’t quite my goal average, but considering all the light pedaling on downhills bringing my average down, it was a good effort.

Run – 3:05:20 (7:04 per mile). I came out of the gates on fire on this run. I just went straight to my target HR (160 bpm), and nailed it. My first mile came in at 6:15, and then I gradually slowed down and settled into a pace in the high 6’s. I did the first 13.1 miles in 89 minutes, and I thought I had a shot at a sub 3 hour marathon, but in the end, I couldn’t quite pull it off. Below is a copy of my HR/pace file from the race.
Storytelling time: The last hour of the race was one of the worst hours of my life. I entered a world of hurt and suffering that is nearly impossible to describe properly. I was completely on auto-pilot survival mode. Running an Ironman marathon at near-threshold heartrate is an incredibly difficult feat, and it completely tore apart my legs. I was so battered and exhausted that not only were my legs periodically cramping, but my forearms were cramping. What the hell?!?!? Forearms, cramping on a run? That was definitely a new experience for me.
When I finished, I went straight to the medical tent, because I was in seriously rough shape. After the race, talking to some friends about the run course, they mentioned some fans/sights/signs/etc from the course. I had no idea what they were talking about. I was so absorbed in my own world during that last hour that apparently I just wasn’t processing the outside world. I’m somewhat shocked that I was able to move along at 7:20-ish pace for the last 10 miles. 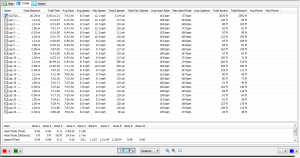 General thoughts: Great race. I set personal bests for swim time, run time, overall time, and overall place. It’s the first time I was ever able to truly push my body to it’s “speed potential” in an Ironman race. Next Ironman: the World Championships. Kailua-Kona, Hawaii. October 9. Hopefully, I’ll shave another few minutes off my personal bests… And, it’s a great excuse for a Hawaiian vacation if any of you want to come out and watch!!